We are maintaining our support to you in these extraordinary times. Read more

Irrespective of their age, Polish candidates are optimistic about the job market

According to the data revealed by CBOS, Poland’s Public Opinion Research Centre, the percentage of negative opinions voiced about the Polish labour market has dropped from 49% to 25% over the last year. It is clear to see a confirmation of what for the last twelve months has come to the fore in the Confidence Index survey, conducted cyclically by PageGroup, a recruitment company. Its recent findings covering the first quarter of 2017 prove that as many as 70% of Poles take a positive attitude to the current situation in the domestic job market, which means a 6% rise against the corresponding period twelve months ago.

Currently, Poland comes third across European countries and is beaten only by Sweden (78%) and Germany (80%). 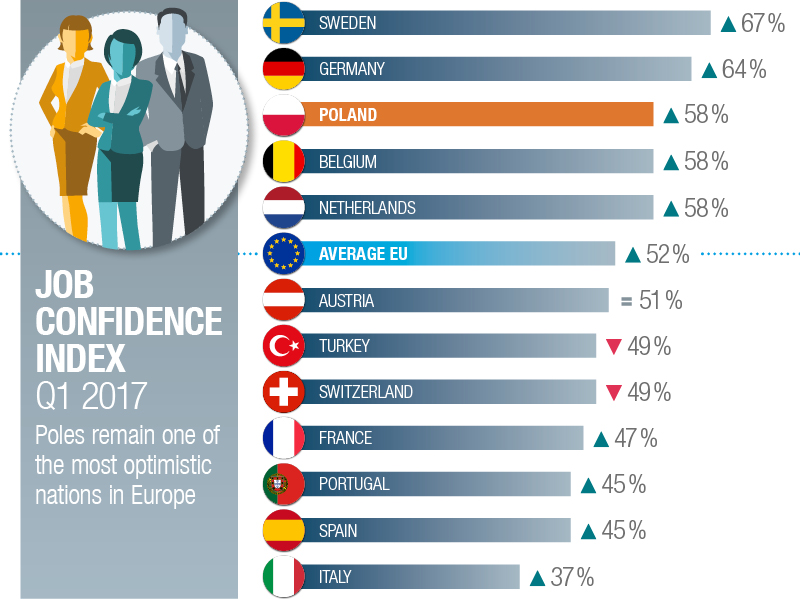 As far as specific age groups are concerned, the highest levels of optimism about the current situation in the labour market have been noted in people under 30 (78%). Compared to the first quarter of 2016, this rate rose by 14%. For those aged 30 – 49, in turn, it stood at 70%, which implies a concurrent growth by 3% against last year. Also, people aged above 49 take a positive stance towards the job market: in this age group, optimism gained 8% and went up to 55%.

Propitious labour market conditions also impact the professional life of Polish people: as many as 48.8% have managed to change jobs within 30 days, while 31% have finalised the move in less than three months.

What is more, 75% of the respondents aged below 30 believe that their prospective situation in the job market will be equally good. In the 30 – 49 age group, this rate stood at 72%, whereas for people aged above 49, it reached 55%. According to the respondents, in the coming twelve months, this will also translate into better pay. In fact, in this period, 53% expect to get a rise.